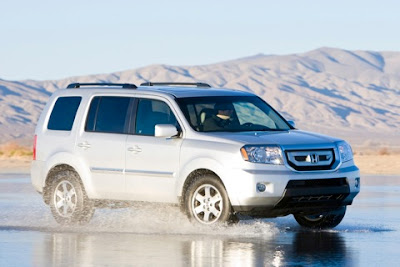 What's New for 2011
The 2011 Honda Pilot returns mostly unchanged from last year. Navigation is now available on the EX-L trim level and a rear entertainment system is now included on the Touring model.
Introduction

At a glance, the 2011 Honda Pilot would seem to do a fine job as a family hauler. There's plenty of space for kids and cargo, it boasts excellent crash scores and comes with Honda's sterling reputation for reliability.

Honda has made a point of giving the Pilot third-row accommodations roomy enough for actual adults to fit back there; if you're looking for a minivan alternative, this one might just work out. Traditional Pilot traits like a well-cushioned ride, a smooth powertrain and optional four-wheel drive are also present and accounted for. This year's sees only minor changes in a couple of feature availabilities -- navigation is now an option on EX-L models and a rear DVD entertainment system is now included on the top-of-the-line Touring trim.

Body Styles, Trim Levels, and Options
The 2011 Honda Pilot is a midsize crossover SUV offered in four trim levels: LX, EX, EX-L and Touring. Each is available with either front- or all-wheel drive.

The EX-L upgrades to leather upholstery and steering wheel, heated front seats, power passenger seat, a sunroof, increased sound deadening, and an auto-dimming rearview mirror with integrated back-up camera. Optional on the EX-L is a rear-seat DVD entertainment system and a voice-activated navigation system bundled with Bluetooth, an iPod interface and a 10-speaker premium audio system.

Both the EX-L's optional features are included on the high-end Touring model, which further adds a power liftgate, tire-pressure indicators, driver memory functions and rear-window sunshades.

Powertrains and Performance
The 2011 Honda Pilot is motivated by a 3.5-liter V6 that generates 250 horsepower and 253 pound-feet of torque. A five-speed automatic is the only available transmission. Front-wheel drive is standard, but all Pilot models are available with an all-wheel-drive system that automatically apportions power to the rear wheels -- up to 70 percent -- when front slippage occurs. This system also has a driver-selectable "lock" feature that routes maximum torque to the rear wheels at speeds below 19 mph.

In performance testing, we clocked a Pilot Touring from zero to 60 mph in 9.7 seconds, Fuel economy is aided by Honda's Variable Cylinder Management (VCM) system, which shuts down half of the V6's cylinders when they're not needed.

Safety
Standard safety equipment includes stability control, front-seat side airbags and full-length side curtain airbags. Antilock disc brakes are also standard, but they don't do a very good job in panic stops, requiring a very long 149 feet to halt the Pilot from 60 mph. Only vehicles without ABS or heavy-duty trucks tend to match that distance, which is at least 20 feet longer than most competitors.

In government crash tests, the Pilot performed flawlessly, scoring a perfect five stars in frontal and side-impact testing, and the Insurance Institute for Highway Safety likewise awarded the Pilot its top "Good" rating for both frontal-offset and side-impact crashes.
Interior Design and Special Features
Mimicking the 2011 Honda Pilot's utilitarian exterior styling, the interior features a rugged and blocky theme. The Pilot keeps stride with the competition with its roomy third-row seats. In a segment where third rows are meant for child-size passengers only, the Honda Pilot is one of the few that can accommodate adults in relative comfort.

With the second and third row seats stowed, the 2011 Honda Pilot can hold up to 87 cubic feet of cargo, which is technically less than some rivals, but its boxy shape accepts bulkier items with ease. For smaller items, there are plenty of thoughtful storage bins and pockets throughout the cabin.
Posted by Bob Boyte Honda at 11:27 AM

At a glance, the 2011 Honda Pilot would seem to do a fine job as a family hauler.

Hi, I came across your site and wasn’t able to get an email address to contact you. Would you please consider adding a link to my website on your page. Please email me back and we'll talk about it.