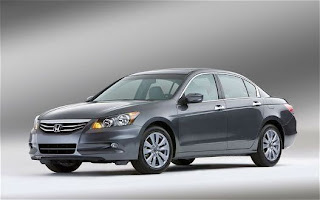 The 2011 Honda Accord refresh is one of the more significant Refreshing/Revolting redesigns we'll cover this year. That's because the Accord has a very real chance of taking the Toyota Camry's long-held Best Selling Car in the U.S. crown for calendar year 2010. The 2011 Accord receives a number of minor improvements, but will they be enough to keep sales higher than the Camry?

The most obvious change is the Accord sedan's new grille. No, the new grille doesn't transform the Accord from ugly to stunning, but it certainly does make the car less awkward. A thick chrome bar sits atop the Honda badge and two thinner strips of chrome.Another clue distinguishing this 2011 Accord from the 2010 model are the new 17-inch wheels. They make the car look more sporty than the upscale multi-spoke wheels on the outgoing four-door. In back, the Accord now features red taillight strips just outside of the license plate area. The new touch, taken from the Japanese version of the Accord (called the Inspire), doesn't add much if you ask us. Honda says the Accord has a revised instrument panel, though you'd have to look hard to find it in the single sedan interior shot the company has released thus far. Most of the Accord's visual changes are on the exterior, anyway.

DEAL!!!
Check out our website at www.bobboytehonda.com
Posted by Bob Boyte Honda at 10:27 AM