2011 Honda Odyssey soon to be released in the Jackson Mississippi market! 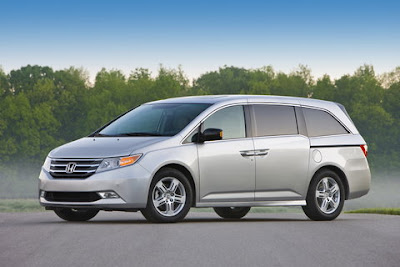 Introduction of the 2011 Odyssey from Honda.

The minivan isn't as popular as it once was, but it remains the quintessential form of transportation for families big and small. No other vehicle offers the type of versatility and space for kids and the copious amount of stuff that invariably comes along with them. The 2011 Honda Odyssey is a completely redesigned entry among this dwindling number of minivans, replacing a model that was widely considered to be the best in its class for a decade. In other words, it has some very big shoes to fill.

The 2011 Odyssey is an inch-plus shorter in height than before, but has gained an inch-plus in width, creating a slightly sleeker appearance aided by a wedge-shaped front fascia and unique "lightning-bolt" character line. Aside from being a design flourish, this character line also improves visibility for passengers in the third row of seats, who will also enjoy a greater amount of knee and shoulder room. Honda says three adults can sit back there, but we're thinking the middle spot's fold-down armrest will be utilized more frequently.

Minivans are renowned for setting themselves apart with never-before-seen features. Some, like the Odyssey's flip-and-fold third-row seat became an industry standard, while others, like the last Odyssey's middle-row Lazy Susan storage bin have been quickly forgotten. This time around, the Odyssey introduces a small refrigerated storage compartment beneath the center stack controls, a trash bag holder, second-row seats that shift laterally to make room for child seats and a wide-screen entertainment system with an HDMI input. The new Odyssey also improves upon previously introduced features, like a simplified process for lowering the third-row seat and an enlarged second-row removable middle seat.

Honda has not yet released full details about the 2011 Odyssey's powertrain, but we do know it will continue to only be available with front-wheel drive and a 3.5-liter V6. Honda's cylinder deactivation system is now standard on every Odyssey and fuel economy is estimated to be 19 mpg city and 28 mpg highway. This is a significant improvement versus the last Odyssey (especially those trims without cylinder deactivation) and better than the new Toyota Sienna's four- and six-cylinder engines.

More details about the 2011 Honda Odyssey will be coming soon, including available trims and equipment, as well as exact dimensions and specifications. Check back for a full review of how this new Odyssey stacks up against its minivan competitors before it hits dealerships in the fall.

Information was provided by Edmunds.com
Posted by Bob Boyte Honda at 4:37 PM

This latest Honda OdysseyHonda Odyssey has a more modern and classy design, indeed the best Hondacar